Inicio > English > Pope Francis: A Bishop of Rome with a heart for Argentina 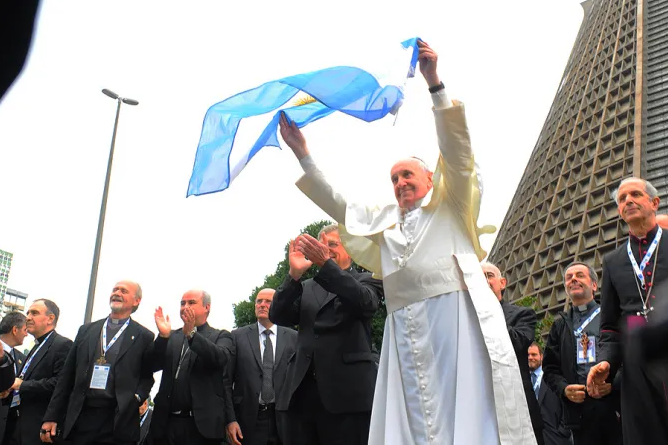 Pope Francis: A Bishop of Rome with a heart for Argentina

Vicar of Christ to the entire world, yet still a son of his homeland: Pope Francis continues to be attentive to Argentina, as shown by the news that the Vatican may open its fileson the country’s military dictatorship, as well as the possible advancement of the cause of beatification of an Argentine entrepreneur.

That the Vatican would open its files on Argentina’s military dictatorships was revealed a week ago by Msgr. Guillermo Karcher, one of the Pope’s masters of ceremonies.

In an interview granted Apr. 27 to Radio America, a Buenos Aires radio station, Msgr. Karcher stressed that the Pope wishes to open up the Vatican files, and so “he has asked the Secretariat of State to take charge of it, and work has already begun on declassifying the Vatican archives related to Argentina’s dictatorship.”

During much of the 1970s, Argentina was ruled by a right-wing military government, which “disappeared” thousands of left-wing activists and militants, accusing them of communism. From 1976 to 1983, the regime disappeared as many as 30,000 Argentines, and may have murdered as many as 15,000. Kidnappings, torture, and other violations of human rights were rampant.

Information on these cases was collected by the Vatican, laregly through the apostolic nunciature in Buenos Aires.

During the junta’s rule, numerous priests and religious were killed for their work in the poor neighborhoods of Buenos Aires, which was considered a communist act.

At that time, from 1973 to 1980, Fr. Jorge Mario Bergoglio – now Pope Francis – was the Jesuit provincial in Argentina. He used his position to create an underground network of assistance and escape for those targeted by the regime.

Msgr. Karcher added that “the work will take some time” to release the Vatican’s files, since their opening “is a challenging job, which consists in putting into order what is in the Vatican archive to allow research.”

At the moment, the files of the archive of the Secretariat of State are open until the period of the Pius XI’s pontificate (1922-1939), as the work of classification and digitalization of documents has been completed through that period.

Since his election as Bishop of Rome, Pope Francis has met several times with the Mothers of the Plaza de Mayo – a group of mothers of disappeared children – always backing their efforts to uncover information about their missing family members.

Lilita Boitano, a leader of the Mothers of the Plaza de Mayo, met with Pope Francis April 22, repeating her request that the Vatican files be opened.

In an interview with Radio del Plata, Boitano said she asked Pope Francis “if the Church could open its files on the Argentine dictatorship and eventually issue a statement of self-criticism for its behaviour under Argentina’s military dictatorship, and (the Pope) responded that they are preparing the documentation on the issue.”

Boitano then met with Msgr. Giuseppe Laterza, an official of the Secretariat of State. According to Boitano, Msgr. Laterza told her that “the collection of files is now over, and that “the files are now being scanned and digitized,” and they could be “accessible to the public within a year.”

The most important documents may be the reports of the late Cardinal Pio Laghi, who was apostolic nuncio to Argentina from 1974 to 1980.

Cardinal Laghi (then an archbishop) often met with the members of the junta, and the families of the disappeared also turned with frequency to him for help. His office maintained files on the reported disappearances.

Together with this commitment to shed light on the years of Argentina’s dictatorship, Pope Francis is also forwarding the cause for the beatification of Enrique Shaw, “a rich Argentine manager who was rich, yet saintly” as Pope Francis said in a March 13 interview with the Mexican television program Televisa.

Pope Francis started the diocesan procedure for the beatification of Shaw in 2005 when he was Archbishop of Buenos Aires, and has now received it as Pope.

Shaw was born in 1921, started his business after the Second World War, and founded in 1952 the Christian Association of Business Executives. He also was among the founders of the Catholic University of Argentina and the Christian Familiar Movement, and served as president of the Argentine Catholic Action.

In 1955, he was a victim of the anti-Catholic waves that took place in the first phase of Juan Peron’s administration. According to Navarro Floria, the postulator of the cause of beatification,  even after his arrest he proved altruistic, giving other inmates the mattresses his family brought to him, as well as food.

Shaw established a pension fund and a health care system to provide the 3,400 industry’s workers medical service, financial support in case of illness, and loans for important life events such as marriage, birth, and death.

In 1961, the industry led by Shaw was sold to an American trust fund which decided to fire 1,200 people. Shaw was already suffering an advanced cancer that was to lead to his death the following year, but he strongly opposed the layoffs and proposed a recovery plan that was to retain all the workers.

Shaw‘s writings were collected and sent to Rome in 2013, and approved by the Congregation for the Causes of Saints this January. The next step in the process is choosing a postulator for the ‘positio’, a comprehensive document that collects the biography and testimonies of a possible saint.

The opening of the cause of beatification was encouraged by Cardinal Jorge Mejia, a fellow Argentine who was head of the Vatican Secret Archives from 1998 to 2003.

Enrique Shaw, the Argentine businessman who the Pope prays to